So I'm sitting here drinking my glass bottled Coke.  Why?  Because there's something about a good cola coming out of a glass container that tastes good.  Especially if it's not being watered down by ice cubes.  Ahhh... I just took another drink.

What on earth does drinking a cold glass bottled Coke have to do with mixing audio?

Coca-Cola found a way to tastefully enhance their product and make me love it more.  That's what compression can do for your mix!

It's true!  It's so incredibly simple that many miss compression all together in their first few mixes.  I know I did.

Seriously, the first album I mixed (for my own band mind you) I manually went in and automated the volume for every track in every song.  I did this to musically squash down the spikes and bring quieter parts up to the rest of the mix.

Guess what....that's what a compressor does!

I literally spent days mapping out the automation for each track.  I was getting so burnt out and it hurt so badly to hear the rest of the band say they didn't like the mix.

A compressor is basically an automatic volume controller that you can set.

So how is a compressor different than what I did?  Well, it's better at it...and each compressor adds some character to the sound.  Some claim to be transparent, meaning that they don't change the sound other than just being a ride on the fader.  But this just isn't true.  All compressors color the sound in some way.  Some more so than others.  And depending on what you're going for, that can be a good thing.

Every compressor is a little different, but they all do the same thing.  I'm looking at the outboard hardware compressor on my rack while writing this.  I use a dbx 166XL.  It's gives a decent feel of the vintage dbx sound, but not as much as an old 160. 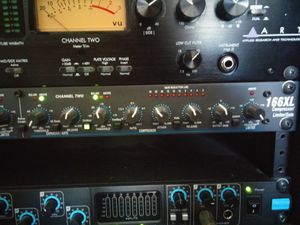 So here's a picture of my dbx 166XL, channel 2.  From left to right the knobs are: Expander/Gate, Release (for gate), Threshold, Ratio, Attack, Release, Output Gain, and Limiter.

Basically, the 166XL has 3 functions.  It's like having 3 devices in one; a Gate, a Compressor, and a Limiter.

A gate is a device that lets no audio pass until it's loud enough.  How loud?  You get to set that.  This is used a lot on drums, but not a ton on much else. However, it comes in handy from time to time.

A compressor is an automatic volume controller.

And a limiter is a hard-wall compressor.  Meaning that it doesn't just pull back audio that hits the threshold, it stops it at the threshold.  Careful with limiters, if you hit  that limit too much it can sound really bad.  Now onto the compressor section.

A threshold is a limit that you set for your normal waveform audio.  Typically, you'll set your threshold at a point where most of the audio doesn't touch it, only the spikes.  See those red LEDs on the top in the middle of the compressor?  Those tell you when the audio passes the threshold and by what degree.  This gives you a visual so you can tell when the threshold is set where you want it.

The ratio setting is the ratio that you want the audio that goes above the threshold to decrease by.  Remember, this is a soft-wall, not a hard-wall; audio can go past it and the compressor just pulls it back a bit.  Use your ears on this one, but the most commonly used settings are 2:1 and 3:1.  A 1:1 setting isn't using the compressor at all, and a high 10:1 pulls it back a lot, and probably not that musically.  Again, use your ears.

The release setting sets how quickly the "fader" goes back to it's assigned setting after the audio goes back below the threshold.  Set too fast of a release and the ending of the sustain might be louder than the attack or middle of the note.  Set too slow of a release and you might lose a bit of sustain or get a weird swell in the audio.  Use your ears, that's what they're there for.  (They're, There, Their...sorry, I had to.)

Here is one of the reasons that a compressor is better than setting the automation for every track.  Where every other setting on the device adjusts the audio once it passes the threshold, the output gain adjusts the audio that is below the threshold.  If you increase the output gain you end up bringing all of the audio closer to the threshold.  This can diminish some dynamics, but typically only if you really push it hard.  What it does, however, is to add an intensity to the sound.  This is where, at least to me, I hear the characteristics of different compressors.  If a mix sounds dead, try adding a little more to the output gain on the compressor.

Lastly, there is the limiter.  It's the hard-wall compressor.  Whatever you set the threshold too, no audio will go beyond that.  It's great if you're afraid you're going to blow speakers or you have to gain a mic so hot that you fear clipping.  In digital...a limiter will ALWAYS sound better than clipping.  Don't clip the audio (max the audio load).  In your DAW, you can use a limiter, or maximizer, on your mix bus to bring the overall volume up.  Yep, getting your music as loud as what's on the radio is that easy.  Set your limiter/maximizer (same thing) to something like .4-.8 below 0 and bring the gain up.  Don't have it limit too much, it'll sound bad.  But that's how you bring the overall volume up.  You're welcome.

There you go.  A blogpost style Compression 101.  The point of this post was to give you an idea as to what a compressor does, and how each part of the compressor makes it work.  Go and play with it in your DAW.  Guess what...you won't ruin it.  You can undo something if it makes it worse.  This really gives you a chance to play with it, and figure it out in a more intimate way.