I'm alright admitting that I like sci-fi. Science fiction writing and films can be wildly entertaining. Have you noticed that a lot of the things they discuss in sci-fi end up becoming reality? And if you take a quick look into the science behind the types of things they're doing, they're usually not too terribly far off the mark on the things that are already here and happening. I remember watching Star Trek as a kid and hearing them talking about phasing issues when they were teleporting or having issues with the shields.

I don't remember giving it much more of a thought than "that sounds bad!"  And you know what, that's exactly what you hear people say about phasing in audio. But is that really all there is to it? Is saying "phasing" or "phase" just a fancy industry term for "that sounds bad?"

In reality, phase is an exact term about a specific thing happening when using 2 or more microphones on a single source. And let's start by saying that it's not always bad. I'm not saying that it's never bad, but playing with it can produce some pretty interesting results.

What is phasing in audio?

Simply put, phasing is when sound waves from the same recording of the same source (ie multiple mics) are out of sync with each other. This happens when microphones are set up in a way that the sound hits them at different stages of pressure. Sound waves are waves of positive and negative pressure going through the air. That's why when you zoom in close to a sound wave in your DAW you can see it go up to a peak and then dip down to a peak at the bottom as well. Positive and negative. If a source is completely out of phase, 180 degrees out, then the positive peak on on one track is matched by a negative peak from the other track, making the audio disappear. 10 + -10 = 0. Try it out on your own. You can duplicate a track in your DAW and then invert the phase on the duplicate. Leave them both panned straight up the middle. 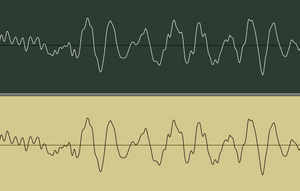 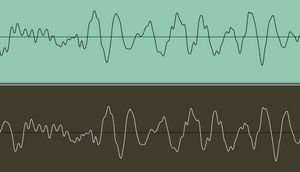 Out of phase waveforms

I've been in audio for a while now, and I don't know that I've ever seen a perfectly 100% out of phase recording like that. It's great for the science talk, but it so rarely happens in practice that it's hard to talk about. (Short of the mics being setup perfectly and someone accidentally hitting the phase button on the mixer or pre amp.)   What you'll most likely run into is mics being setup at different distances and having some degree of phasing. You'll notice this because, by them selves, either mic sounds great! But together they sound like poo. If that's the case, zoom in on the tracks and check on the phase. Try inverting the phase polarity on one of the tracks so see if that sounds better. If they're slightly out of phase, there will always be phasing issues, but that doesn't mean you can't get a good sound. At least not sometimes. But there are times when, if you don't like the sound the phasing produces, that the only thing you can do is re-record or pick the best sounding track and ditch the other one.

I use some mics by Placid Audio to purposefully play with phasing. These are specific effect microphones and, in my opinion, the best ones money can buy. I absolutely love using my Resonator microphones and playing with the phase to create different sounds. I've been able to get some amazing results that have blown clients away.

With the understanding that not all phase is bad phase, what can we do to combat the bad phase? I'm sure you've noticed by now that I'm all about taking the time to record right and not fix things in the mixing stage. This is, yet again, one of those times. The best thing you can do to combat phase problems is to set up your mics properly and do some test recordings prior to the actual recording. Phase issues happen when microphones are at different distances from the source. More specifically, the diaphragms of the microphones. So the first step would be making sure the microphones are the same distance from the source. Use a ruler, a stick, a tape measure, a string, a mic cable...something to get them as close as possible to the same distance.

Yes, there are times we use mics at different distances. I'm sure you've seen room mics. Then you want to use the 3:1 rule. For mics further away, they need to be 3 times the distance from the closer mic as the closer mic is from the source. Meaning if the close mic is 1 foot from the source, the further mic should be 3 feet further back from the close mic. This also works with spacing spread stereo mics. If they are going to be 1 foot from the guitar, let's say, then they need to be 3 feet apart. Make sense? While the 3:1 rule doesn't negate phasing completely, it sure does seem to help and tends  to sound a lot better.  The true test is to use your ears.

Remember, not all phasing is bad. Sometimes you might find that you really like what it produces. So test things out and don't be afraid to be creative.